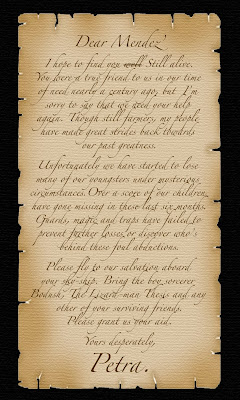 Slicing open the raggedy envelope, Amaranta scans through the letter.
‘Mendez’? Why is that name so familiar?
It’s obviously the diminutive of her grandfathers name, but it’s more than that...
Hurrying to find her great aunt, she finds Eris sitting in her favourite wicker chair in the jasmin gardens.
Her aged aunt pales when she hears the name.
Due to Aunt Eris’ failing eyesight, Amaranta reads the letter aloud to her.
After she has finished, Amaranta is surprised to see the old lady crying.
“Mendez was one of my older brothers. Your great grandfather tricked his friends into going on a dangerous quest and then rewarded them by killing every one of them. Although just a girl at the time, I’m ashamed to admit that I helped with the attack.”
The old woman pauses for a moment.
“That was the day I died.”
Amaranta’s eyes widen with shock.
“That’s right. I died. Your great grandfather Estaban had me brought back to life, but by then Mendez had gone. I never saw his handsome face again.”
The younger woman can’t help but interrupt.
“What happened to him? Who is Petra?”
"Swearing he’d never return, Mendez sailed across the ocean to the savage lands in the north. Here he raised an army to battle the Dragon whose presence we feel even over here.
Some said he died, but others believed he survived and started a life in a small town called Redford.”
Eris pauses again to wipe a tear from her eye and catch her breath.
“It matters not now though. He was several years older than me and will certainly be dead by now. Help me inside child. I don’t want to be in the sun any longer”.
Posted by Hedzor at 5:10 AM