Closing in for the thrill 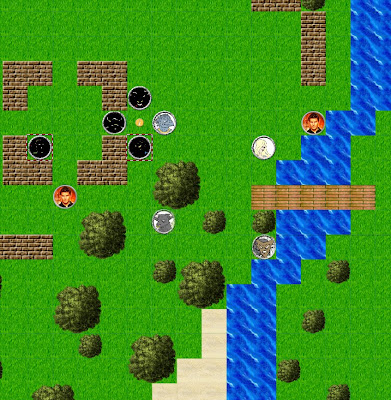 Forced back onto the retreat, the revengers took yet more unanswered damage.
The Angels are relentless and press forward contantly.
The almost constantly bloodied Dragon-born: Rip has been caught again and subjected to yet more critical blows.
Frankly, it’s only pride holding him up.
In his eagerness to take down Twinkle, Uriel let his ‘cross of health’ fall so that he could summon another celestial creature to attack the already wounded elf.
Only the dwarf Porkins and the laughing Belial seem to still be OK.
As for the Angels…
They’re suffering from a few ‘inconveniences’, but that’s all they seem to be to them.
The Revengers are nearly boxed in.
Is there any chance of a last gasp, daring escape?

Six sessions along and STILL all the combatants are alive. In fact Team Manus Arcangelus actually have gained two new team-mates thanks to Uriel’s summoning powers.
The Angels have used all their Action points but no second winds.
The Revengers have only used two Action points and a second wind.

Session seven will hopefully be on Monday the 24th at 9pm.

The map shows everyone including uriel’s two summoned creatures.
Uriel’s position might be a bit off. (I’m guessing from Twinkle’s memory.)
Posted by Hedzor at 9:53 AM