In the Inappropriately Yellow corner... 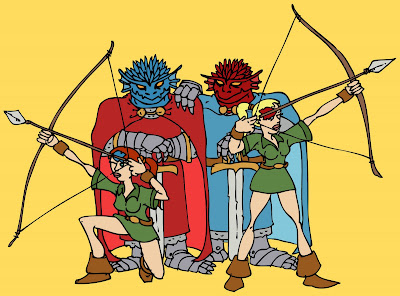 (Edit: Redrawn and replaced because even I was offended by the lazy copy/paste/flip.)
:)
Posted by Hedzor at 4:40 AM 3 comments:

Apart from the 'Draw' rule.

This can happen if both parties agree to it (in the case of both players thinking a loss is looming) or if neither side take any aggressive action for three consecutive rounds.
(e.g. One Party hiding in the woods while the other party refuses to follow them in.)

Also I have one query...

Taking a Potion is a Minor action but does that include drawing it out?
We went for two Minor actions when I played Sven but when I played Josh we went for just one.
What should we settle on?
One seems a bit easy to me and takes away from the Clerics and the Paladins etc.
Posted by Hedzor at 7:27 AM 4 comments:

And in the Grrrrrrr...een corner... 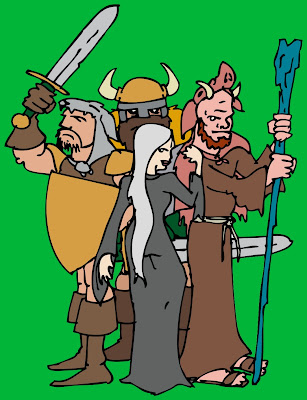 War: Male druid, dressed in the fur of a wild boar.

Famine: Male warden, wearing the fur of a winter wolf.

Death: Male Barbarian, wearing the fur of a lion and wielding a massive fullblade.
Posted by Hedzor at 5:28 AM 3 comments: 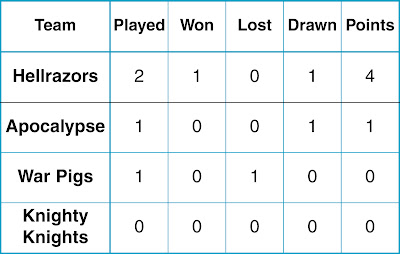 Of the War Pigs, only the Deva Wizard still stands.
Only the Deva Wizard plus his two Fire elementals.
Still emboldened by this, all four of the Hell razor’s rush to finish him off.
Mastema is the closest but Belial and Azazel aren’t far behind. Even the badly hurt Voland can’t resist blasting the heavily outnumbered Deva.
Eldritch blast after eldritch blast rain down on the hapless Deva, yet somehow he’s able to resist.
Resist AND retaliate.
Blasts of frost knock them off their feet and hamper their movements.
Bolts of lightning tear away their overconfidence.
The fire elemental scorches Belial and in his rage he teleports over to the helpless Goliath and finishes him off with a spiteful blast.
It is the injured Voland however who ends the battle with an oddly lucky shot.
From the furthest away and with the clever Deva using cover, his eldritch blast catches him across the temple.
As he losses consciousness, the Deva swears that he’ll learn from this bitter lesson.
The last sound he hears however is the cruel laughter of the four Tieflings.
Posted by Hedzor at 3:49 AM No comments: 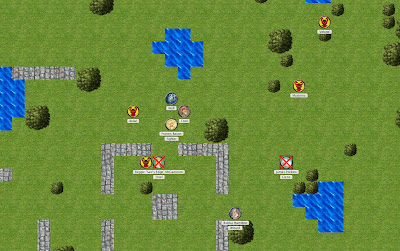 Posted by Hedzor at 7:25 AM No comments:

With the Dwarven Cleric down, the Hellrazors allow themselves smug smiles. Of all the classes, Healers are the worst. They make attempting murder so frustrating!
Using their abilities so conceal themselves and to teleport around the battlefield, The Hellrazor’s manage to mostly evade the War pigs attacks and still blast the Halfling Rogue. Despite his natural elusiveness, he can’t long avoid the multiple blasts of eldritch energy. It’s Azazel who finishes him off. ‘Best to make sure’ she sniggers as she appears over him in a bust of brimstone. The poor Halfling hasn’t a chance.
The Hellrazor’s leader: Voland is in trouble though. The massive Goliath: Bacon, won’t let him escape and he’s only still on his feet due to his now shattered ‘Armour of Agathys’.
He won’t survive another blow from the War pig’s defender.
Electing for the cowards way out, Voland ‘Otherworld strides’ as far from him as he can. His instantaneous departure however causes an implosion of sorts and the Goliath and flame warrior elemental are hurt.
Sensing weakness, Belial rushes back to exploit it. Another blast of eldritch energy is enough to send the mighty Goliath reeling to the ground.
Unbelievably the massive Fighter is still only unconscious.
'He's not dead? Inconceivable!'
Posted by Hedzor at 4:16 AM 6 comments:

And in the Bluuue corner... 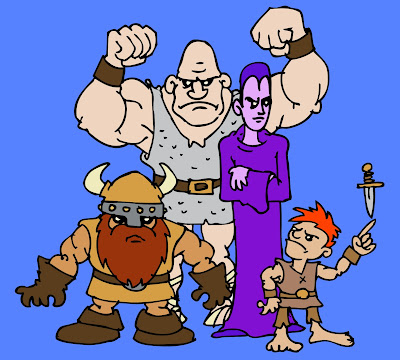 In the Red Corner... 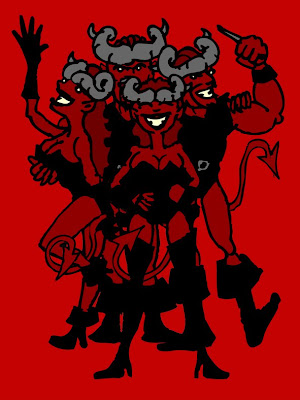 All Tiefling Warlocks!
Posted by Hedzor at 5:35 AM 4 comments:

Azazel and Vorland round on the diminutive but now exposed Halfling back shooter. Vorland has been wounded by him but his magical armour is keeping him relatively safe.
Three blasts of Eldritch flame burn the tiny figure where he stands.
He collapses to the floor still smoking.
The huge Goliath wades in and attempts to reverse the tide of the battle, supported by the Deva Wizards fire elementals.
Three of the Hellrazors are soon hurt and seem powerless against the massive, bizarrely tough Fighter.
Worse, the Deva Wizard moves over to the presumed dead Cleric and administers a healing draft.
The Dwarven cleric’s heavy eyelids flutter open.
Realising that the battle may be turning against them, the Warlocks do what they always do in times of stress.
They flee from trouble and blast the helpless.
The three confronted by the Goliath Fighter teleport away while the unmarked Mastema blasts the just rousing Dwarven Cleric twice in rapid succession.
This time there can be no doubt that he’s gone to the Dwarven underworld.
Posted by Hedzor at 4:13 AM 2 comments: 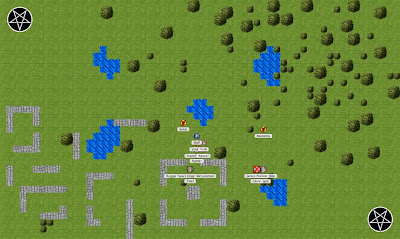 Posted by Hedzor at 3:50 AM No comments:

Having only learned a partial lesson from their last battle, they summon the mystical ‘Armour of Agathys’ around them before they rush headlong towards the enemy!
‘Chaaaaarge!’ shouts Azazel.
The mixed group of non-humans stealthily drop back towards cover but the Tiefling Warlocks merely fire their crossbows as they close down the distance.
Bolt after bolt misses but the Tieflings seem indifferent.
Finally they manage to spot one of the enemy group and unsurprisingly it's the gigantic Goliath Fighter.
A blast of Eldritch energy passes straight through his armour. Much to his surprise the blast of Hellish energy sears him deeply.
Falling back the huge warrior gulps down a healing draft and looks to his Dwarven healer companion.
Seeking to help, the Dwarf casts a Command at the nearest evil Warlock. It fails though against its monstrous will.
Then in a massive over response, two of the Tieflings send multiple eldritch blasts at the Dwarf.
He resists the first and the second but the third sends him back down to the earth Dwarves so love.
In quick succession, the battle rages. The Halfling snipes from cover, the Goliath rushes forward and the Deva (not realising the Tiefling’s natural resistance to fire) summons up multiple fire elementals. They are still powerful enough to hurt however.
Two of the Fiendish Warlocks are hurt but so to are the Goliath and the Halfling Rogue…
Posted by Hedzor at 1:57 AM No comments:

Let Slip the Boars of War

At the opposing corners pentagramic platform, about a hundred yards away, a fearsome group appears.
A towering Goliath Fighter, a dour but tough looking Dwarven Cleric, a smirking Halfling Rogue and a haughty looking Deva Wizard.
The Four Tiefling Warlocks lick eachother's lips…
This could be trouble…
Posted by Hedzor at 6:03 AM No comments:

After their narrow escape verses the Human Team Apocalypse, the Tiefling Warlocks returned to their Hell of choice to lick each others wounds.
Their leader: Azazel calls them together.
“We were rash last time. We gave no thought to our own safety and foolishly rushed toward our own destruction. We were fiendishly lucky to escape with a draw.”
The other three listen shame faced.
“Next time we will be more cautious. Next time we will show the enemy some respect.’
A deep red light glows from their pentagramic portal.
“Come girls and boy. Our chance of redemption has arrived!”
Posted by Hedzor at 6:14 AM No comments:

First there was Darkness

Then, in between the planes with a silent 'plop', the fabric of space and time burst and the epic battle arena of the Gods came into existence.

The Gods hope to have created a world that is pleasing to the battle-hungry adventurers but are open to suggestions. Just pray and hope that your voices are heard! You can attach tokens to these prayers that the Gods might place on the battle grounds if your prayer was worthy (http://www.rptools.net/index.php?page=downloads#TokenTool).

May the games begin. The divine popcorn is ready!
:)
Posted by Hedzor at 6:03 AM 1 comment:

Tool of the Devil

Curiosity overcoming his fear and weariness, Vogir approaches the demonic figure.
“What do you mean?”
The tall Tiefling smiles broadly as he opens up his arms.
“I’m here to offer you power. Power to destroy the loathsome Dragon.”
Vogir is young but not stupid.
“In return for what exactly?”
The demonic creature’s features crumple in mock misery.
“Why for your soul of course.”
Vogir turns away.
“Wait!” shouts the demon. “My master has seen your potential. He has been watching your family for over a century. Rather than the 'standard' pact, he is willing to grant you a small amount of his power simply in exchange for your vow to kill the Dragon. The closer you get to your goal the more powers he will give you.”
Vogir turns back.
“So what you’re saying is that ‘if’ I continue on the path I’ve set myself, your demonic master will gift me an increasing level of his hellish power?”
The tall Tiefling seems to sag.
“I know; I can hardly believe it myself. Still the powers granted will be substantially less than the normal Warlock would be given.”
Vogir smiles a thin humourless smile.
“I accept.”
The Tiefling looks confused.
“Don’t you even want to know my master’s name?”
Vogir’s smile evaporates.
“Don’t worry. I think I can guess.”
Posted by Hedzor at 3:56 AM 2 comments:

Deal with the Devil

Gripping his arm tightly to prevent more of his precious blood leaking out, Vogir makes a not so silent vow.
“Redford has fallen and my people scattered. I shall have my revenge on the accursed Dragon and all his inhuman minions!”
It is then that the young Vogir feels a presence watching him.
Spinning around he spies a cloaked and hooded figure.
Trying to keep the quaver from his voice, Vogir shouts out to the stranger, “What do you want?”
He’s surprised by the stranger’s response however.
“Funny, that’s what I was going to say.”
Dropping his hood and smiling, the tall stranger reveals his blood red skin and demonic horns…
Posted by Hedzor at 8:52 AM 2 comments: