So, since we might actually continue this, I (Dag) have calculated xp:

So far you have found:

Stirge gains a level and is now a level 2 specialist, he gets two dots to distribute on skills and gets to roll a d6 for hitpoints.

This is most definitely going to protect him against the stuff that lurks in the towers. Lucky him.
Posted by Hedzor at 5:22 AM No comments:

There was warmth in the tower. She had forgotten what it felt like, lost in her dreamless sleep. Not much, but enough to change the feeling of the obsidian under her body. She stretched out her limbs, stroking the smoothness of the stone below her, as she stirred.

Below her she could her the faint noise of voices in the depths of the tower. She had been so lonely, for so long.

She was hungry.
Posted by Insanodag at 3:53 AM 2 comments:

Lord Rician paces the floor of his spacious office. He seems to have spent the majority of his life within these four walls.
The brash ranger had managed to unnerve him. Was he a typical idiotic adventurer or did he really suspect who and what his daughter really is?
Still, he could take no chances. His two guards should be back soon with news of his death.
A timid knock on his door draws his attention back from his thoughts.
On being given permission to enter, a young clerk shuffles in.
Lord Rician can guess the news; his men have failed.
His two best men.
Turning to the clerk, Lord Rician gives the order to double the guard outside his daughter’s room.
Posted by Hedzor at 4:34 AM No comments:

It’s the very next night when Vogir hears the lock of his door in the Inn being picked. Rolling out of bed, Vogir slinks over to it and hides in the darkness.
Instantly after the ‘click’ of success, two warriors rush in and stab at the bed.
By the time they realise their mistake, the lock-pick is staring goggle-eyed at the two swords sticking through his stomach.
The two warriors aren’t novices though and work together in their attempts to kill their unarmoured target. Vogir’s too quick through and weirdly hard to focus on in the darkened room.
The second warrior doesn’t have time to register his partner falling before he too collapses from his wounds.
After wiping the blood from his blade, Vogir checks the men’s faces. He recognizes both of the warriors as guards from his earlier visit to Lord Rician’s manor house.
Straightening up, Vogir smiles.
Initially he’d been suspicious of the Dragon’s true identity.
After his meeting with Lord Rician, he had been almost certain.
After this attack though, he was positive.
...
Now he can move on with his plan without any lingering doubts.
Posted by Hedzor at 7:17 AM No comments:

Lord of the Lies

Immediately after breakfast, Vogir strolls over to Lord Rician’s manor house. After a brief discussion with the guards, he’s allowed entry.
He’s kept waiting in the outer hall for a good fifteen minutes before an elderly clerk comes down to see him.
‘What do you want?’ the old man inquires rudely.
Vogir bites his tongue before responding.
‘I was hired by your master to rescue his daughter. I failed but was able to track a young, blue dragon back here. Your town is in danger.’
The old clerk opens his mouth to speak but Vogir hushes him with a raised hand.
‘Just tell Lord Rician. He’ll want to know’.
The grey-haired clerk hurries off and Vogir finds himself waiting again.
After another fifteen-minute wait, the clerk returns and gestures Vogir to follow him.
They travel past several rooms, several locked doors and several armed guards. Finally they come to a grand set of double doors.
The clerk knocks and after a moment, a serious voice answers ‘Enter!’
Walking a few steps behind the clerk, Vogir stops in front of Lord Rician’s huge, ornamental desk.
He doesn’t look up.
The clerk leans down and they share a quick, whispered conversation. The clerk leaves in silence but it’s still minutes before Lord Rician speaks.
‘My daughter is safe; no thanks to you. You and your mercenary friends failed and as such I owe you nothing. What do you want?’
His face set in an even expression, Vogir responds. ‘I’m glad your daughter is safe. We managed to break into the black tower and kill every Black-cloak present but your daughter wasn’t there…’
Lord Rician remains stone-faced.
‘And?’ he sighs.
‘But we did find a dragon.’
Vogir stifles a smile as he senses Lord Rician stiffen in his chair.
‘It escaped but I managed to track it to the outskirts of Fewham’.
Lord Rician finally raises his face to Vogirs.
‘I’ve heard nothing of any dragon’.
Vogir knows that Lord Rician is lying and more importantly he now knows that he was right about everything: Sybille and the dragon are one in the same.
‘Don’t worry though. I’ll find it and, when I do, I plan to kill it’.
Vogir hears Lord Rician’s chair scrape back behind him as he strides from the room. With his face hidden from Lord Rician’s view; Vogir releases his smile.
Posted by Hedzor at 7:08 AM No comments:

Extinguishing the black light of darkness

Puffing hard, Shalom looked down on the bloody mess that once resembled a beautiful, young woman and her wide-eyed, blond-haired child.
The group’s leader: Thrum had looked shocked at the carnage he'd awoken to and the one-trick wizard: Bjorn also seemed squeamish…
Still, despite their innocent façade, they were evil and Shalom’s duty is to extinguish evil.
All evil.
Nothing will prevent him from his godly path.
Not twisted, diseased and monstrous creatures.
Not savage dwarves.
Not poisoned darts or poisoned porridge.
And certainly not ten-year-old boys with fleshy, two-foot-long, blood-sucking tongues!
Posted by Hedzor at 3:49 AM No comments: 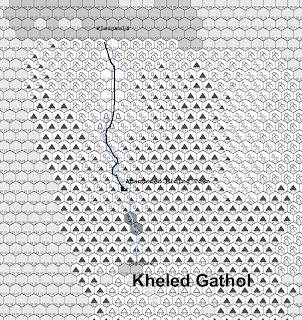 While laying in his bunk at the Dunn Inn, Vogir mulls over his recent discoveries.
The girl Sibylle had turned out to be a young blue dragon.
It could only be a hatchling of the blue tyrant herself.
The duplicitous Lord Rican had obviously found it as a wyrmling and used it as a bargaining chip against the Empress herself.
But how could that work?
Lord Rician must have given the Empress reason to belive that he’d kill the infant dragon if she sent any of her agents to retrieve it.
By its size and what little he’d discovered, the smallish dragon could be no older than thirty. Still, old enough to defend herself or just leave, should it wish to.
So perhaps Lord Rician was at least being partially truthful.
Perhaps, somehow, he truly believed he loved the creature?
Perhaps, somehow, the dragon truly loved him in return?
Then again, perhaps not.
The young dragon had been given a pampered life, full of luxury and privilege. Idiotically adored by the people of Fewham.
Exactly the kind of lifestyle that would appeal to a blue dragon.
Wondering how those self-same people would feel if they knew their ‘Lady’ was in fact a dragon, Vogir feels an idea forming…
Posted by Hedzor at 2:24 PM No comments: