Appearing in a burst of sulphurous smoke and flames, the four demonic combatants gaze around themselves.
They had appeared at the opposite end from the last time they faced the apocalyptic humans.
Vorland smiles at each of his team in turn.
Now is the time for thought.
Now is the time for strategy.
Now is the time for cleverness.
…
Fuck it!
Watching the humans run for the cover of the ancient ruins, the four Hellrazors’ charge forward, firing their crossbows indiscriminately and laughing.
Posted by Hedzor at 6:29 AM No comments:

A gout of flame wakens Vorland from his slumber. Sliding out of both the bed and the still sleeping Mastema, he pads naked to the beacon.
It’s been a while, but they are being summoned once more to the field of battle. Of all the teams that they’d fought, only the Humans had tested them.
He had been conceited and arrogant and the Humans had taught him a vital lesson.
A lesson he’d applied to every subsequent engagement…
Never underestimate your opponents.
Thanks to that, the Warpigs, the Knighty Knights and even the Denim recruits had been dethorned.
Looking deep into the flames, Vorland smiles.
It seems his Hellrazors’ are to be given another chance.
The humans it seems, were also able to brush aside their competition and so the gods have demanded a rematch.
Standing naked and proud, Vorland strides back to the three sleeping Tieflings.
Shaking them roughly, Vorland shouts: ‘Wake up my fine fiends. It seems that tonight we'll finally get to shaft somebody other than eachother!’
Posted by Hedzor at 3:30 AM No comments:

After ordering all the remaining Gnomes and the surviving Vedics to assemble in the main amphitheatre, Gerromy strides boldly up to the central lectern.
Coughing slightly, he addresses the hundreds of faces present.
Faces hungry for new leadership…
“Friends, Gnomans, Hamstermen…”
Posted by Hedzor at 3:44 AM No comments:

Slowing down as he approaches them, Vogir waves to the approaching crowd.
“Welcome back friends! I’m so glad you made it. Petra and Vin explained that you’d come after me. I’m so sorry I didn’t wait a day longer.”
Vogir sweats for a moment as he waits for the coming response.
“Where did you get to Human?”
Grateful that it’s Ghanash that replies, Vogir explains that he’d waited as long as he could and eventually led a small group of Gnomes to sneak into the mountain and spirit away the captive Gnomes of the village.
Vogir repeatedly thanks the group for coming and congratulates them all on successfully rescuing so many of the Gnomish prisoners.
After escorting everyone back, the Party and children are made welcome. Even the thirteen Human children are taken away to be washed and dressed.
A great feast is laid on and dozens of the adult Gnomes play music and organize games.
Everyone is happy.
Even Vogir smiles as he watches the laughing children.
Later on in the evening, he calls everyone over.
“Ghanash, Orestes, Rudha-an, Dokan… And you too Lukas. I have something for you.”
Pulling out a heavy wooden chest from behind him, Vogir hands out a small leather purse to each of them in turn.

They only seem to contain a score of coins, but when the bags are opened, the coins glitter like platinum!

Treasure: Everyone gets 20pp (2,000gp) each as a reward for surviving and successfully rescuing the Gnomish children!

Experience: Everyone is 11th level!

Well done everyone!
No deaths and the successful completion of your mission.
(I’m pretty impressed and have to grumblingly admit that 4th edition does ‘encourage’ teamwork.)
;)
Posted by Hedzor at 3:31 AM No comments:

Vogir thankfully accepts Petra’s gifts. The boots and amulet are amazing, but the quiver is by far his favorite.
He and his team of six Gnomes had rescued all of the children of the village as well as half a dozen others. They will be welcomed and cared for here, especially considering the amount of treasure they’d managed to take from one of the Sneafang vaults.
Criz and Vin look up at the tallish Vogir with a strange feeling of pride. They knew his Grandfather when they were barely grown and now they’ve helped him save their village again, just as they did a century ago.
Suddenly a call goes up and an alarm bell rings…
A large group of people are heading towards them!
Clambering on top of a large pile of crates and barrels, Vin pulls out a pocket telescope and peers into the distance…
"It’s your friends… And they’ve got about forty Gnomes with them!"
Vogir looks up at the precariously balancing Gnome.
“They’re not my friends. I barely know them other than the Dragon born. Frankly after sharing a couple of adventures with them, I can’t believe they survived.”
Vin prods Vogir in the thigh.
“They didn’t just survive; they seem to have rescued dozens of our people. Perhaps you were wrong about them? Perhaps they were more than just a way of distracting the Vedic forces away from our rescue attempt?”
Already turning to fetch his horse, Vogir mumbles a reply…
“Perhaps…”
Posted by Hedzor at 3:11 AM No comments:

Additional Treasure of the Vedics

Six magical scrolls from the Library…

Battle Magic from the Crettin…

Cloak of Resistance +1 Lvl: 2 520gp
(Minor Action: 5 resist all until the beginning of next round)

Two Maces of Aftershock +1 Lvl: 2 520gp
(+1d6 if criticals and all enemies adjacent to target are knocked prone.)


From the Balcony guards:

In the puritan styled room of the High Vedic can be found several magical items.


There was a lot more stuff, but time constraints and an unwillingness to be derailed, meant that some fairly decent stuff got missed.
☹
Posted by Hedzor at 5:46 AM 4 comments:

Standing wounded and burnt in the would-be throne room of High Vedic Liebniz, Orestes, Dokan, Ghanash and Rudha-an look around themselves.
The rat-faced leader of the Vedics lies dead in the flames of the still raging furnace. Both the burly guards and one of the flaming orb throwers from the balcony are also beyond saving. The remaining Vedics seem to have had the fight taken out of them at the sight of their supreme leader having to resort to using the now idle automaton.
Dokan prods it cautiously, but after its initial assault, it now stands silent.
A cough from behind, reminds them of the collection of Gnomish children as well as the ginger furred Head librarian: Godel and the turncoat: Gauss.
Gerromy, the seemingly eldest of the Gnome ‘teenagers’ coughs again.
‘Er… Before you slaughter any more of the Vedics, you may want to consider what the best solution for the future is…’
As soon as it’s established that the Vedics have surrendered, Lukas turns up with his not-so-merry band of Human children atop a floating wooden door.
After much debating, it is agreed that whatever Gnome children want to leave with the adventurers can, but whoever wants to stay will equally be allowed to.
The Vedics themselves will work with the older Gnomes to continue their work, but without the use of any additional Human children. The Human children already converted will be rehabilitated as best as possible and treated in a more ‘Gnomane’ way from now onwards.
Head Librarian Godel offers them the military equipment on ex-high Vedic Liebniz’ body plus any thing they want form his private safe.
On looking they take it all, realizing the value and that some of it might be useful.
The Party can hardly believe the change in demeanor that’s come over the Vedics. These clever if not powerful warriors seem to convert into butlers and servants with a shrug of their furry shoulders.
The adventures wash, eat and rest as the Gnomes decide amongst themselves, who will stay and who will go.
It’s early on the third day when the five adventures travel out through the stunningly crafted upper levels to the main, mountaintop entrance.
Each of them is momentarily blinded the brilliant arcs of electricity as the large hatch is opened.
It is guarded by just two Vedics manning the ‘lightning shield’ and ‘lightning cannon’. Dokan does flinch though when he passes a chained, but massive Snowlbear. He looks twice when he notices the mechanical devices surgically connected to its claws, beak and the thick, dark lenses over its eyes.
Squinting against the painful light, he even wishes he had a set of them himself!
It takes five days to walk the downward journey back to Finklestone and although none of the thirty-eight Gnomes are originally from there, they all wanted to leave Mount Snaefang. All the Finklestone Gnomes escaped during the time the adventurers were battling through the Vedic forces.
The journey is relatively easy and they have at least twice the provisions they need.
It’s on the last day that they see a surprised looking Vogir riding up to meet them.
Posted by Hedzor at 5:35 AM 1 comment:

Two mace-heads are better than one

Heading towards the captive Gnomes, Pauling leads the Party along side corridors as long as he is able.
It is only when they enter a grand hallway, that Dokan realises that they’ll have no choice but to fight from here onwards. The corridor has been blocked with barrels, furniture and everything else the Vedics could get their paws on.
It’ll take hours to get through that way.
This only leaves a large ornate door leading to one of the many libraries.
With Dokan and Orestes leading the way, Dokan carefully pushes the door open…
The massive room inside is truly impressive. An octagonal shaped room with doors in four opposite walls. The walls themselves stacked with thousands of books.
The room itself cascades downward, level-by-level, like the inside of a staggered cone. Each level holding more books and tomes.
The lowest level has some sort of ornate cupboard in its centre and whatever it contains must certainly be precious.
All of the upper tiers contain human children strapped into painful looking devices. The purpose of these devices seems to be the force-feeding of information into their eyes, ears and minds. These machines are connected by entrail-like tubes and wires into eight, much more comfortable looking, chairs at the penultimate level, each of them containing young Gnomes.
This is all that Dokan can take in before his attention is pulled to the sight of the enormous, two-headed, chainmail wearing giant.
“At last; sumfing for us to hits!”
Posted by Hedzor at 8:29 AM No comments: 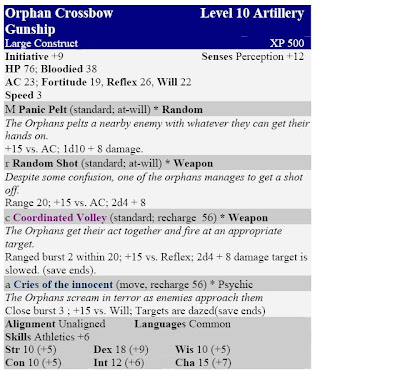 The frightened orphans listen intently to Lukas. He is promising them a chance to fight back against the horrible monsters that have abducted and hurt them, and done horrible things to their friends. A couple of them voice some objections, but the rest are excited by the chance of getting to handle real crossbows and fly into real battle with real heroes.
Posted by Insanodag at 2:39 AM 3 comments: