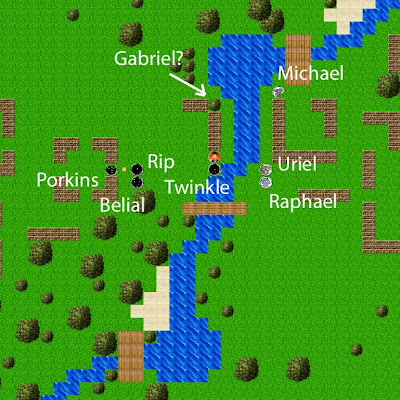 After a slow, tactical first session, Manus Archangelus found the Revengers close to the centre of the battlefield.
Gabriel was first to appear and so she was the one hit by both the waiting Belial and Twinkle.
She was hurt but not badly and quickly disappeared from view.
Then the minotaur Michael followed.
He was also hurt and hobbled by one of Twinkle’s arrows. A powerful shot but not powerful enough to drop him.
In Twinkle’s eagerness to score some extra damage though, she left herself open to Uriel and Raphael’s counter.
They moved in formation towards her and Uriel summoned an angelic creature beside her, while freezing her in place!
The other Revengers were also hit by blankets of Uriel’s flaming power.
Porkins and Rip managed to avoid it but the demonic Belial was hit full on.
Fortunately, his hell-born origins gave him a certain resistance to fire.
Posted by Hedzor at 4:49 AM